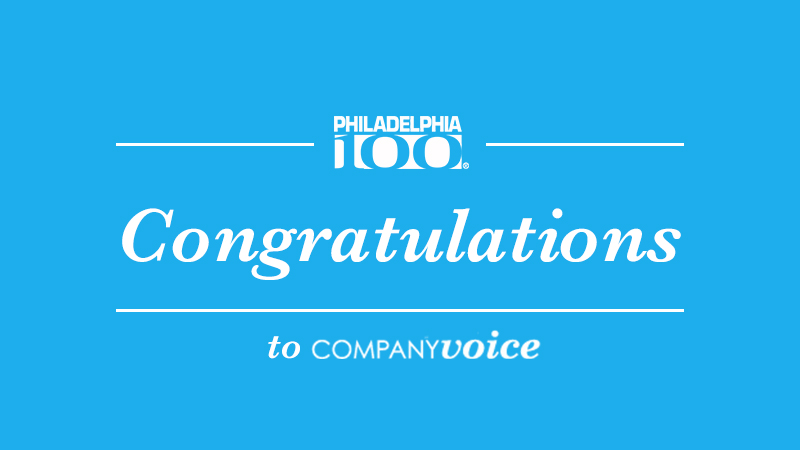 PHILADELPHIA, PA, September 11, 2017 – Congratulations to Claudia Timbo and CompanyVoice for being named as one of the top 100 fastest-growing, privately-held companies in the region for the second year in a row. The Philadelphia 100® has been the hallmark of entrepreneurial achievement in the region since 1988. Each year the Wharton SBDC, Entrepreneurs’ Forum of Greater Philadelphia, and Philadelphia Media Network host an exciting, suspense filled evening in which each nominee is acknowledged for the volume and velocity of its revenue growth over the past three years. In 2016, CompanyVoice claimed the 34th spot on the list and this year it’s expected to significantly move up in the ranking.

Claudia Timbo is no stranger to high achievement in the fast growth arena. In 2007, she took a start-up contact center to the enviable position of #3 on the Philadelphia 100® list. The leadership qualities that pervade each of Claudia’s endeavors have a customer centric focus in common. CompanyVoice becomes a seamless extension of its customers’ outreach by offering a highly skilled workforce with a unique hiring model that engages seasoned professionals who are in retirement or transition from the same industries as its clients. This subject matter expertise coupled with the latest in contact center innovation makes CompanyVoice the first choice as a teleservices partner.

Philly 100 festivities begin with a CEO Breakfast on Tuesday, September 26th and culminate with main awards on October 26th when the rankings are revealed for the very first time! For a full list of winners see http://www.philly.com/philly/business/The_winners_of_the_2017_Philadelphia_100_Award.html